So the weird thing... this 4.7 earthquake that hit here in Reno last night? That, as all of the news agencies are reporting (and by reporting, I mean mostly just copying from the A.P., since it's basically verbatim the same story over and over again) knocked mayonnaise, ketchup and bottles off store shelves, that caused a rock slide that damaged a water flume built in the 1800s... yeah, I never felt it. Not at all. Apparently, I was driving around and got home just after the quake hit, so I never noticed anything out of the usual. They did three hours of live coverage at my job, even though the quake hit at about 11:40 at night, but being me, I never turned on my television, so I had no idea anything had gone down.

So anyway, now the fear-mongers in the news are letting us all know that we should expect a bigger, more wicked quake to hit at any time (because this series of quakes is going the reverse of the usual pattern, in that it started with small quakes at the end of February and the quakes have been getting stronger instead of weaker as they come, which is the usual reaction of the media whenever anything like this happens. Of course, there always could be a bigger quake come along, because hey! I'm in earthquake country again, so you never really do know what's going to shake down (heh), but I promise to let you all know that I'm still alive once that happens. 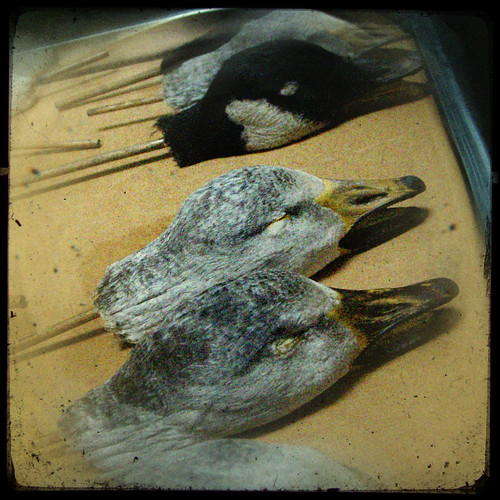 Bird Heads On a Tray, originally uploaded by Booknero.


So I'm kind of obsessed with a bunch of photos that I took at the Buffalo Museum of Science a month or so ago.

Some of you might think this is weird, but c'mon: bird heads on sticks! How can you go wrong?

Why do publishers insist upon publishing books that I want to read whilst I am in the middle of a NaNoing?

Apparently, I shall read and write simultaneously. More or less.

How about y'all? Do you continue reading while you are writing, or do you go cold turkey?

Don't you just hate it when you get a good head of steam going on your NaNo writing (or writing in general), only to realize that what you've written could be made SO much better if you tossed out the ideas that led you to the point that you are currently at and just started over from the beginning?

Well, I don't hate it, really, but the timing could have been better ;)

So I'm driving down to the movies today to catch the 3D release of The Nightmare Before Christmas, and I glance over at the minivan running along side of me to find a pair of excellent twenty-something breasts, shirtless, braless, pressed against the passenger window.

Life can be good sometimes.

Love is the condition in which the happiness of another person is essential to your own.

There is no excellent beauty that hath not some strangeness in the proportion. -- Francis Bacon

Just having flashbacks to this hot chick that I know...

You all must go see The Darjeeling Limited.

Oh my God! The Red Sox won the World Series!

Oh my God! I didn't even know that the World Series was being played!

I am so not aware of what's going on in the sports world...

Okay, I'm a sick fuck, but I'm going to give the ol' NaNoWriMo thing again this year. Maybe this time it will stick!

Anyone want to come and join me, come scope me out over there!
Collapse